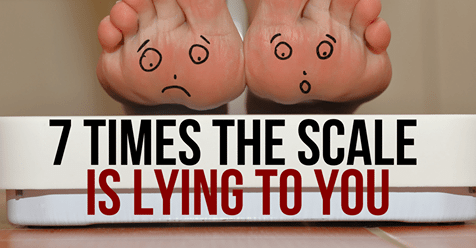 7 Times to Ignore the Scale

The scale can be a valuable tool in any weight-loss journey. It can tell you where you started and help you track your progress. It’s the tool people use most as a measure of success–or failure.

As useful as the scale can be, don’t forget that it’s just one tool you can use, not the only tool. It’s entirely possible for those numbers not to budge, but you find yourself having to tighten your belt because you’ve lost inches. Used regularly, the scale can help you check in with yourself and help you catch upward swings in pounds before they become double-digit problems. But used too frequently, the scale can drive you crazy.

If you find yourself weighing in often (multiple times per day or every day of the week) you’re not doing yourself any favors. There are certain times when weight fluctuates, and seeing every fluctuation can be disheartening and really mess with your head and your motivation.

Many people find it difficult to give up the scale entirely, which is fine–but there are a few times when the scale isn’t doing you any favors. Take the results with a grain of salt in these situations.

1.  Right after you’ve eaten.
You ate a meal and now the scale is up five pounds? What gives? No, you didn’t actually gain that body fat from eating a heavy meal. It’s more likely that your blood volume has increased due to the quantity of food you’ve eaten, and the weight of all that food is still sitting in your stomach and digestive system. Likewise, high sodium content can cause you to retain fluid. Chances are you’re not going to like what your scale is telling you for a few hours or days, but that doesn’t mean the meal you ate caused real, permanent weight gain.

2. During your first few weeks of a new diet or exercise program.
When you first start exercising or eating healthier, it’s tempting to start jumping on the scale constantly to see progress. If you do, you may see some pretty significant losses, which can be really motivating! But don’t get discouraged when those numbers slow down a few weeks into the new plan.According to the Mayo Clinic, a rapid weight-loss is normal in the first few weeks of almost any weight-loss program. When calories from food are reduced, the body gets needed energy by releasing its stores of glycogen, a type of carbohydrate found in the muscles and liver. Glycogen holds onto water, so when glycogen is burned for energy, it also releases water, resulting in substantial weight loss that’s mostly water (not body fat).Try to avoid jumping on the scale too much during those first few weeks of a new diet or fitness program. It can be discouraging when your weight doesn’t change as quickly as you’d like, and it can be equally discouraging when it stops budging after initial success. A moderate friendship with the scale–not an obsession–will help you gauge your progress but won’t drive you crazy.

3.  Immediately after a workout. You just ran for an hour on the treadmill so you strip down and hop on the scale in the locker room to see how much fat you burned off. Sorry, but fat loss doesn’t happen immediately. Any weight change you really see is lost water weight through sweating that will come right back as soon as you rehydrate. This is another reason why it’s best to weigh-in consistently at the same time of day (just not every day!) for the most reliable measure.

4. You just chugged a bunch of water.
Just as you notice the loss from sweat, you can also notice the gain of water from drinking a lot of fluids. A large 16-ounce glass of water will translate into roughly a pound on the scale; your body will get rid of it, but immediately after you drink it, it’s going to show.

5.  Just before bedtime.
You weighed in first thing when you got out of bed this morning, but before you hit the hay you find yourself wanting to check in again just in case you lost anything today. But try to hold back: If you find yourself a few pounds over or under your morning weight, you haven’t suddenly lost or gained. Instead, it’s just the timing of your last meal, your last workout, your last drink of water, and how much your PJs weigh. For this reason, experts recommend weighing the same day each week, at the same time of day, wearing the same clothing, using the same scale to get as accurate of a picture of your true weight as possible.

6.  You just had a baby.
You just gave birth to a beautiful 8-pound baby! So you hop on the scale thinking you’ll see a dramatic loss. And you’re disappointed that the scale has barely budged. While you might lose up to 15 or so pounds in a week when you account for the baby, placenta, extra blood volume and amniotic fluid, don’t be discouraged if you don’t see immediate changes. While that water and true baby weight may budge quickly, remember that you gained the rest of it over the entire pregnancy. Focus on eating right, getting plenty of rest and enjoying your new baby, rather than losing the pounds.

7. Practically any time during your menstrual cycle.
For women, it’s a crapshoot. The changes that happen in your body throughout your menstrual cycle make your weight fluctuate constantly by up to two pounds during menstruation, your follicular phase, ovulation and PMS. Even more reason not to stress about a couple of pounds here or there, as this type of weight gain tends to come and go.

So don’t let those daily fluctuations discourage you–or get you too excited–when it comes to weight loss. Use your scale as a guide, not the definitive standard of success. The best way to use the scale is to weigh in at the same time of day every couple of weeks. Even then, your body could be maintaining or losing body fat even if the scale never budges. Be sure to find other ways to measure your progress and success outside of the scale—and you’ll stay more motivated for the long haul!

Latest posts by Jenny (see all)