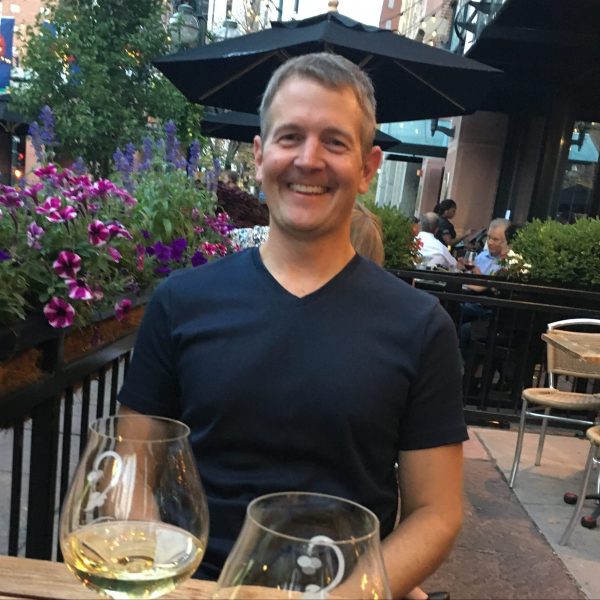 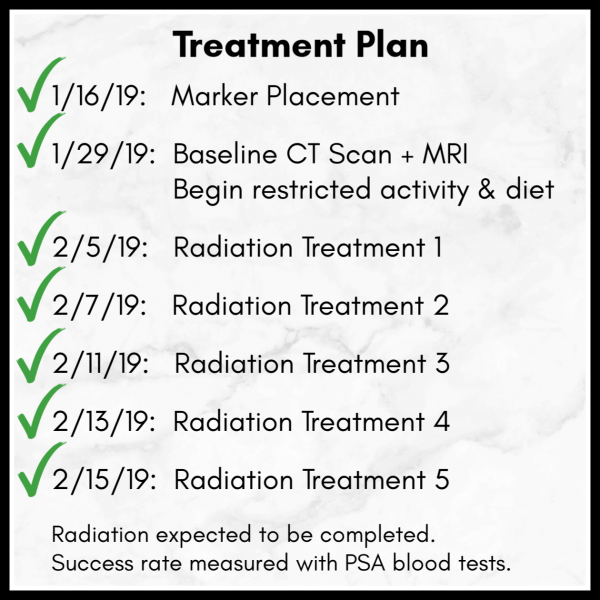 Jeff’s radiation treatment is called CyberKnife and has a 99% cure rate given his stage of prostate cancer. Five high intensity radiation treatments will be completed over a 2-week period with minimal side effects including fatigue and possible inflammation which are expected to subside within a couple weeks after the final treatment. We will be using this page for updates to our family and friends!  Please leave Jeff messages in the comment box at the bottom of this page as he beats this!

It was a long time to wait….but it was the best to hear the doctor say “We have really good news for you!”

Jeff’s radiation treatment was deemed a success based on the results of his follow up blood work. The doctors expect to see the PSA measurement drop by half and then continue to fall over the next 6 months. Jeff’s basically plummeted almost to 0! So we can say that he is non-detect cancer free!

Before treatment, Jeff’s PSA was 3.3 and they doctors would have been happy with a PSA measurement post radiation of 1.5-1.7. Jeff measured at 0.6. He is bragging now about how he studied hard and passed his test!! (Dad joke!) We couldn’t be happier with the good news!

Jeff will get a PSA blood test every three months for the next 2 years and, if all looks good, they will test every 6 months until he is 5 years out from treatment.

Thank you for all your thoughts, prayers, and support!!

A bit late in getting this posted, primarily because it was nice to be done and move on to other things.  Even though I knew the exact schedule of the five treatment sessions, the time went by faster than expected.  I was also happy that any side effects were pretty minimal through the last session.  I did meet with a nurse after the final treatment to discuss likely effects in the coming week, follow-up checkins, and other things.  And as they warned, the side effects peaked in the 7-10 days after treatment was over. Overall, very happy with the progress to date. 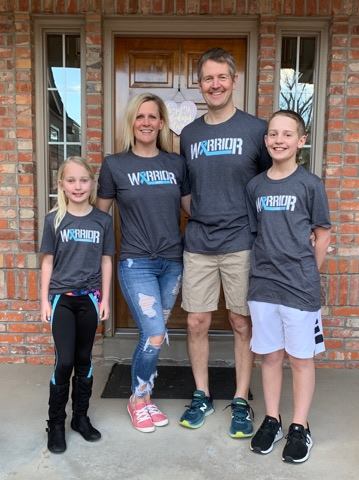 Last November when we received the news that Jeff had prostate cancer, it was such a shocker.

In the following weeks, we sat through appointments discussing the biopsy, stage, grade, aggressiveness of cells and treatment options, side effects, survival rates, and on and on.

It was surreal, to say the least.

We spent the month of February juggling life to fit in Jeff’s treatments and accepting help (which I am not good at) so we could attend his appointments together.

We truly saw the power of our support network here in Colorado. We had friends bringing us dinners on treatment days, picking our kids up from school, taking our kids in when we were home later than expected, and sending prayers and good vibes. We even got these amazing Warrior tees from a friend.

I am so happy to say that Jeff officially completed his radiation treatment yesterday with very minimal side effects. I attribute this to his young age but also our healthy lifestyle.

Now we wait a couple months until the final tests to confirm he is cancer free. We have a lot to be grateful for.

Not a whole lot new to report with session 4, as things keep chugging along.  It is nice to know there is just one treatment left.  Biggest challenge today was Reese being sick and home from school.  That comes on the heels of Cole being sick and home Monday.  Generally not a big deal as the kids can more or less self-entertain and veg out when not feeling well.  What is a big concern is keeping me well so I can finish treatment without any delays.  Obviously the risk is much smaller compared to people doing chemo, but I really don’t want to postpone the end.  Hopefully the extra sleep I have been accumulating has strengthened my immune system.  Crossing my fingers to avoid the bug they seem to have caught!

At least that is what one of my good friends texted me early Monday morning, with the looming middle radiation session.  Actually met with the nurse and doctor before this session.  They wanted to assess side effects and see if I had any questions.  Tiredness has been the most notable side effect, but is one that can be easily managed.  Based upon their experience, they expect side effects to increase after sessions 3 – 5.  Will see if that comes to fruition but so far so good.  Biggest overall question I had for them was “Are the treatments progressing as you like to see”.  Answer was yes and they are happy with progress to date – which in turn makes me happy.  Thanks again for all the well wishes, prepared meals, and watching Reese on treatment days.

Session #2 in the books.  This session was faster than the first one.  I would have to ask, but I suspect it correlates to how easily they can track the gland and “shoot” it.  The stability of their target is partly related to a “calm” digestive system, so hopefully the tweaks we made to diet since Monday are paying dividends.  The diet has been interesting, as proteins (meat, fowl, and seafood) are in the most recommended group.  I love those things but they can leave a bit to be desired when seasoning is kept to a minimum.  Another approved food is graham crackers.  Been smothering those with peanut butter and going to town.  Closest name you could apply to the diet is likely paleo – natural whole foods, high protein, high fat (nuts, peanut butter, avocado), and low carb.  Still feeling normal, so we’ll have to see if any side effects start to show in the coming days.  We are grateful for our friends who have been bringing us meals (even considering the restrictions) and making sure our kids are taken care of after school on treatment days. That’s all for now. 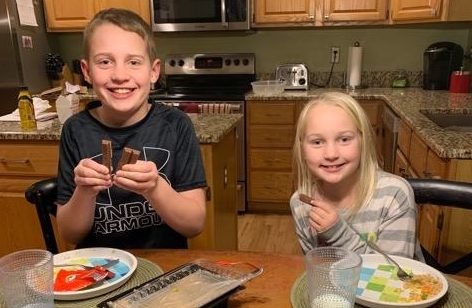 That is the phrase best describing days leading up to treatment session #1 (today).  Curious to know what the session itself is like and how does it make one feel as more are completed.  Anxious because you just want to know and get things rolling.

We got part of those answers this afternoon as session #1 was successfully completed.  The session itself is pretty straightforward – lie on this table and be as still as possible.  While you do that, the mechanical arm moves the radiation emitter all around and administers a series of pulses.

Much like the MRI scan, they have a Pandora subscription and you can elect to listen to whatever you like.  My choice today was classic rock and heard some good ones. I didn’t time the session but I think it was in the 30 minute range.

Not feeling any physical effects yet, but likely just too soon, both in number of treatments and time elapsed since the session.  We’ll have to see what the following days hold, but off to good start so far! 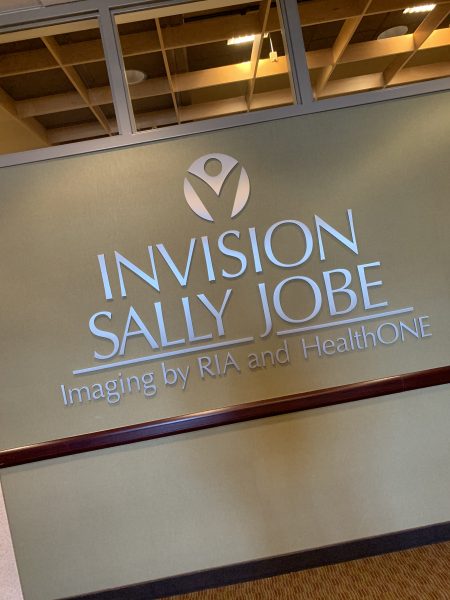 Completed the final step before actual treatment today, which were MRI and CT scans.  Had never done either before, so wasn’t sure what to expect.  CT scan took all of 2 minutes and was hard to tell the machine was doing anything.  Not the case with MRI scan.  They actually give you ear plugs to wear since the machine makes so many noises.  My PA-buddy Will had given me the heads up on noise, but the ear plugs were a surprise.  Also comical, since they offer headphones to listen to music in light of the duration (around 25 minutes).  Went with some deadmau5 for the tunes.  Machine did its thing and most noticeable effect was the buildup of static on the scrubs I was wearing.  While I’m sure our dry climate exacerbates it, not doubt the magnetic field inducing it.  I’ll have Jenny explain it to me later, since she has the undergrad degree in physics! 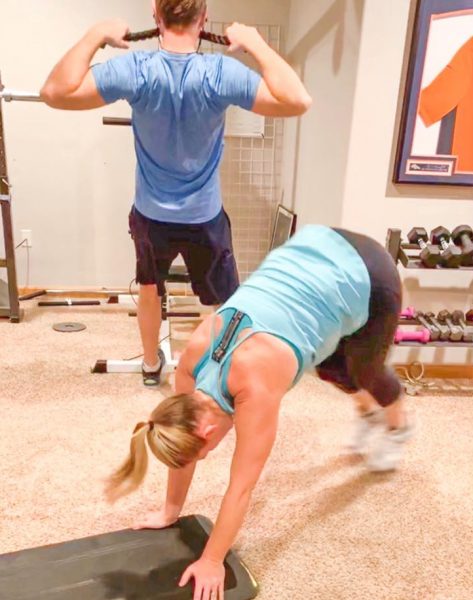 Jeff’s last heavy lifting day for a while. Today starts the treatment phase as he gets his CT scan and MRI to set up radiation.

After today, doctor’s orders: this guy needs to take it down a notch so what did he do? Two heavy lifting workouts in the span of 12 hours💪🏻😂

It was nice to have him working out by my side this morning. Even though today is just the set up, it feels heavy.

And even though the treatment has a 99.9% success rate of curing him AND the side effects are expected to be minimal, this makes the cancer even more real.

We are off to Sally Jobe Imaging Center to get his scans which will be used as the accuracy measurements to target the radiation on his cancer cells. He’s been fasting for 14 hours so we will be getting lunch after!

Thanks to all the family, friends, and colleagues for well wishes – this is awesome! Wrapping up the last “normal” week before moving into more of treatment mode. Allocating various work assignments to others and prepping for what could be the last ski day until later in February. That’s a bummer because it has been a good snow year so far. Also polishing off the last of some cross-fit style workouts, as those are off the list after Tuesday’s scans. Likely need to check with the Doctor on what is allowed because I am a bit fidgety and will go crazy of too sedentary!

Update on Jeff for our extended family, friends and followers😘. We have reached out personally to so many but want to make sure our extended support system knows the latest.

Thank you to those that have sent us messages or quietly wished us well. All of those good vibes are appreciated more than you know!

This has been a bizarre experience to go through…life goes on day by day, but in the background it’s always there. My husband has cancer. WTF? So your thoughts and prayers are meaningful.

After considering the treatment options, Jeff’s decided undergo a radiation treatment called Cyber Knife. It’s a remarkable, newer technology and given that his cancer is early stage, he is a good candidate for it.

It will shorten his treatment from the traditional radiation plan of 45 treatments over 2-3 months to 1 month from start to finish.

This treatment is also expected to have lower side effects than traditional radiation or surgery…and it is no less effective at getting Jeff cancer free! So grateful!!💙

We will be hunkered down for the month of February and expect Jeff to be fully recovered from any potential side effects by mid-March.

I’ll still keep showing up here daily, though! Both of us will be staying healthy with our daily routines.

I know there is a negative side of social media, but for me, this community (whether I have met you in real life or not) keeps me going.

Thank you for your love and good vibes!

Thank you to everyone who sent good vibes and prayers our way since Jeff’s diagnosis.

“We couldn’t have caught the cancer any earlier”

Jeff is Stage 1, biopsy showed non-aggressive cancer cells, so no chemo recommended. Our next appointment is with a radiation oncologist before Christmas to consider those options.

We’ll keep you all updated. Thank you for all of your prayers and thoughts.

Do not avoid your annual physical! Early detection has put us in a very good place for cure rate.

It was two weeks ago today that I heard the news nobody wants to hear – you have cancer. Feel fortunate that it was caught early and is generally a treatable cancer (prostate). Realized today was the last day of November and wanted to share in light #NoShaveNovember. Thanks to so many who have already sent supportive texts, prayers, and food. 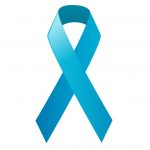 Latest posts by Jenny (see all)